What a Wonderful World

Every show is a grand finale and everyone gets a front-row seat, says FDCI Chairman Sunil Sethi of the first-ever ‘phygital’ fashion week in India (this year has been one of several firsts!). The Lotus Make-up Indian Fashion Week SS’21 has presented a series of extraordinary fashion showcases on film by India’s leading designers, idolizing nature’s beauty or the power to overcome odds, hailing sustainability, and cheering Indian crafts, weavers, and tailors. Here’s a recap of Day One. 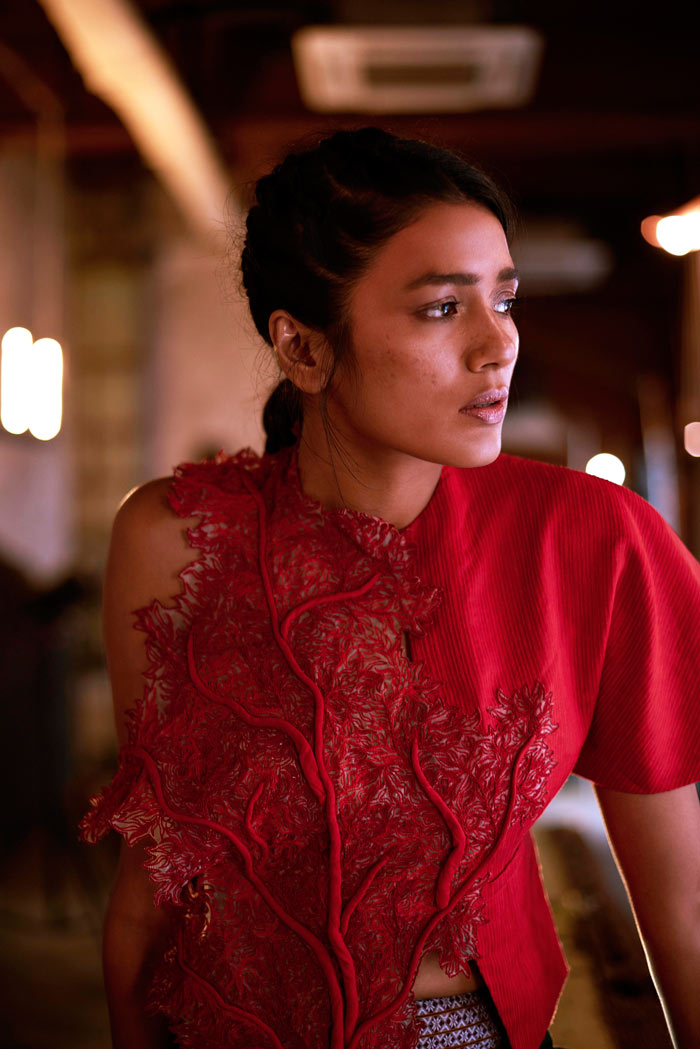 It’s been a flurry of digital, moving images – of sharp tailoring, detailed craftsmanship, recovery, discovery, classicism, eclecticism, grandeur, modernity, and fun. Designers who have made us think, and made us smile, creations that have captured our attention, and presentations that have shone in their individualistic, unique ways. At the just concluded Lotus Make-up India Fashion Week Spring Summer 2021 presented by the FDCI, what better partner than India’s luxurious retail destinations, DLF Emporio and The Chanakya to bring a first of its kind, phygital fashion week experience for viewers at home, guaranteeing a front-row seat.

At time when wedding season officially begins, and bridal parties start ticking off their shopping to-do lists, the Fashion Week has been a prelude to the year’s biggest luxury Shopping Festival and Couture Wedding Show that will go on until October 25th, with digital showcases of some of India’s best-known designers – Tarun Tahiliani, Gaurav Gupta, Suneet Varma, Shivan & Narresh, Rajesh Pratap Singh, Ashish N Soni, Shantanu & Nikhil, Ranna Gill, Varun Bahl, Rohit Gandhi + Rahul Khanna, Neeta Lulla, Ravi Bajaj, Ashima Leena, Namrata Joshipura, Niki Mahajan, Janavi, Rina Dhaka and Abhishek Gupta. “We are delighted to have DLF luxury malls partner with us this season, as we make headway into the digital space with the Lotus Make-up India Fashion Week SS’21. This association has shared synergies as we both are in the business of promoting fashion,” says FDCI Chairman Sunil Sethi. 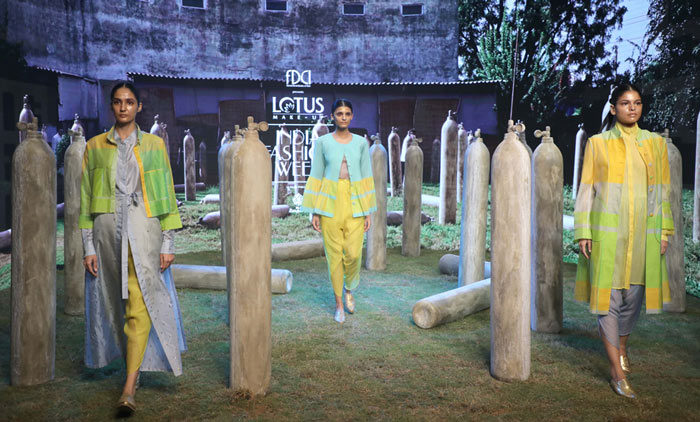 In the very first show, a dramatic film where, amidst doll-like oxygen cylinders representing his tailors and artisans, Rajesh Pratap Singh brought out his models in drop-waisted dresses with bell sleeves in all white. There were also silk satin layered jackets worn with dhoti pants in pastel hues, short jackets with dainty block printing in handloom fabric and glass cotton from his manufacture in Neemrana, and the beautifully detailed pintucks that are a mainstay of his work. (Part of the proceeds of the sale of this collection will go to a CSR foundation that supports craftsmen displaced because of the pandemic.) 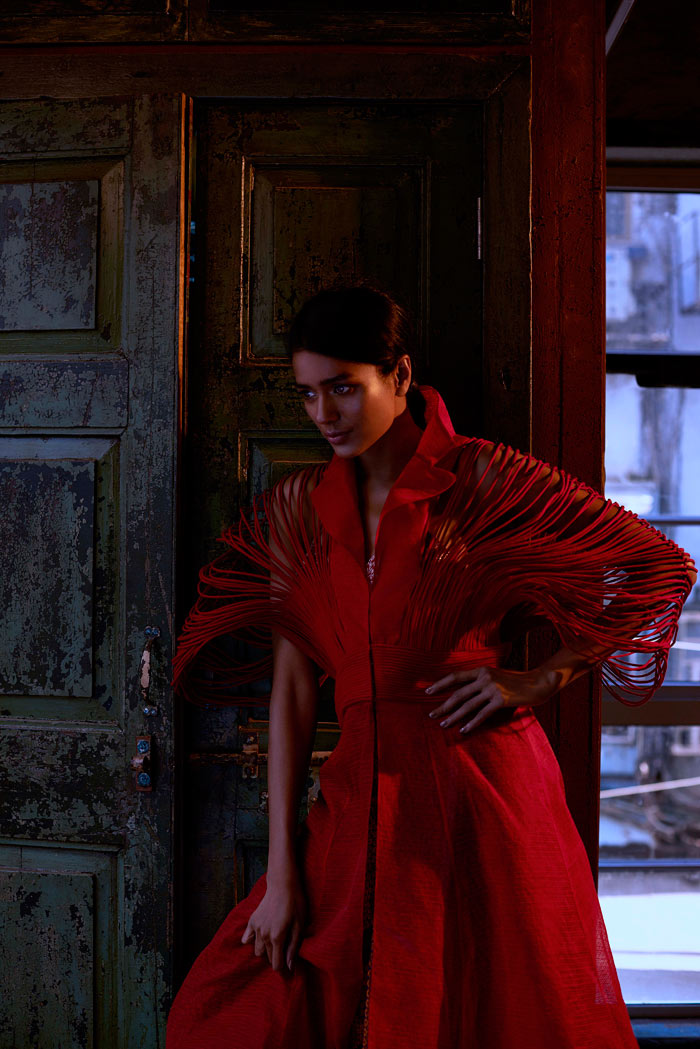 Next came a visually uplifting film set in a verdant Italian garden – that begins with drone footage over a mansion near Milan – a passionate presentation by Vaishali S. Vaishali Shadangule, a fierce advocate of dying textiles like the khun found in Maharashtra, stayed true to her commitment to handwoven textiles, and focused on the theme of Rebirth. Mimicking the crimson corals found in the sea, it was an exploration of chanderi silk pantsuits and asymmetrical dresses in red, white, cream, black, purple and green, with her signature moulded cords, pleats, and translucent 3D leaves and flowers. Vaishali, India’s darling at New York Fashion Weeks past says the response has been “amazing”. “I wanted to set my show in Milan not only because it’s the centre of fashion, but because it has seen so many rebirths, and risen time and time again from defeat,” says Vaishali in her introductory video. “Moreover, the lockdown for me was a period of growth, and I felt close to nature. I also wanted to show the love between mother and daughter – Italians are like Indians, with close familial ties – and hence I chose real Italian women and their daughters as my models.” 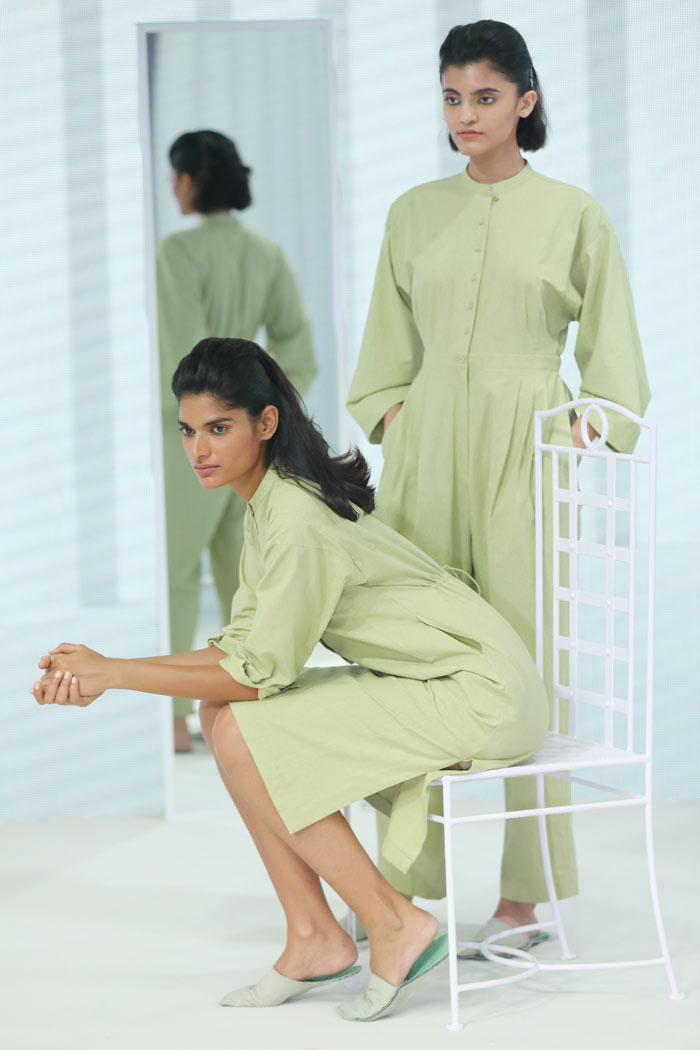 Collection By DHI @ LMIFW SS 21 in lime green and mint

Dhi and Nitin Bal Chauhan shared a show slot, showing divergent aesthetics. Dhi (meaning ‘thought’ in Sanskrit), and headed by Anjana Bhargav and Ankita Bhargava Meattle, was all about effortless, classically chic pieces for the modern woman – but also outfits that are timeless and sustainable, representing the mood of creating during the pandemic. “When everyone was looking outwards for hope, we looked inwards towards self-introspection and self-love,” say the designers in their press note. Mirror Me, is the result, “stemming from emotions like self-introspection, determination and a keen resolve to overcome the obstacles of these times with a stoic attitude of hope and determination rolled together.” What’s interesting is that their use of colours like mint, moss green, cream, baby pink, navy, the jumpsuits, shorts worn with jackets, billowing dresses tied at the waist in organic cotton and hand-spun khadi, are just right for the new WFH (Work From Home) culture that has swept over the world. 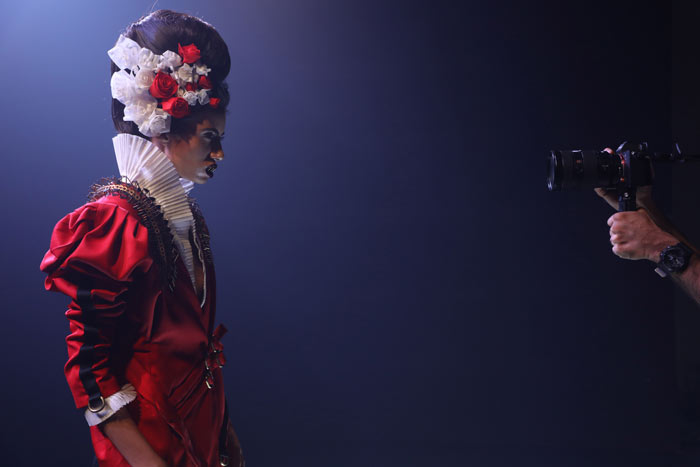 The adjoining show, a film by maverick designer Nitin Bal Chauhan, definitely caught our attention, as it pertained to a dark chapter in our country’s history. It was sombre, and hard-hitting, with the theme of the 1917 Jallianwala Bagh massacre by the British Army, with colonial references beginning with a spoof of a British Queen in Victorian collars (complete with powdered wig and an exaggerated metal grille on her teeth), and oversized sleeves, with meticulous 3D detailing. Nitin is an artist – he is often spotted with his sketchbook, and draws figures where most people would be scrolling down on their social media handles – and his collection is an artistic, avant-garde representation of his talent – with 3D flower epaulettes on pink jackets, lots of metal chains and skull and bloodied figure motifs (sketched by the designer) printed on pantsuits and jackets. What is innocent and pure (the victims, depicted by models with faces wrapped in cage-like structures, their eyes marked with crosses), has been lost and has fallen to the ground, destroyed by the violence of those (in red military outfits) leading this terrible massacre. 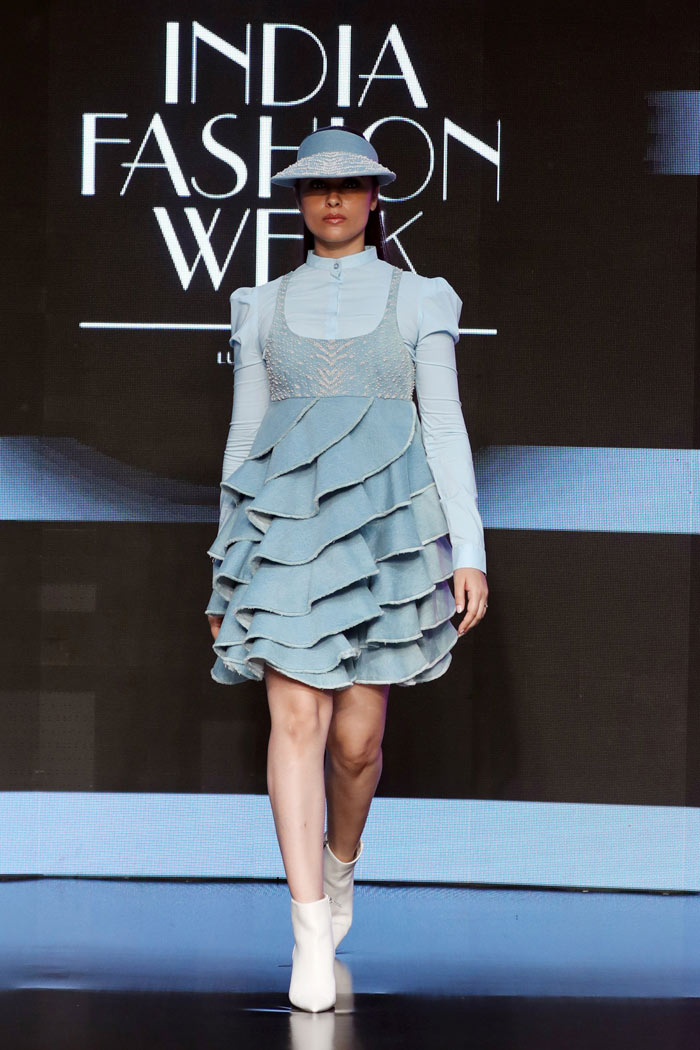 The very hip Namrata Joshipura, for the finale of Day One, had her models strutting in very city-centric silhouettes, global in appeal, modern, and using fine embellishments as discreet touches. Namrata, who’s known to divide her time between metropolises between Canada, India, and the States (New York is her fave), knows how to use colour to her advantage. While past shows have featured slinky pantsuits and gowns in vivid tones, where black is always a predominant theme, this collection has a refreshing dose of baby blue – mohair cropped tops with 3D flowers, layered, ruffled baby doll dresses (complete with a matching visor – a nod to her own athletic, marathon-running persona) – girly pinafores, and grown-up molded sequinned gowns and jackets – presented against a futuristic, geometric digital backdrop, in what else but black and white. 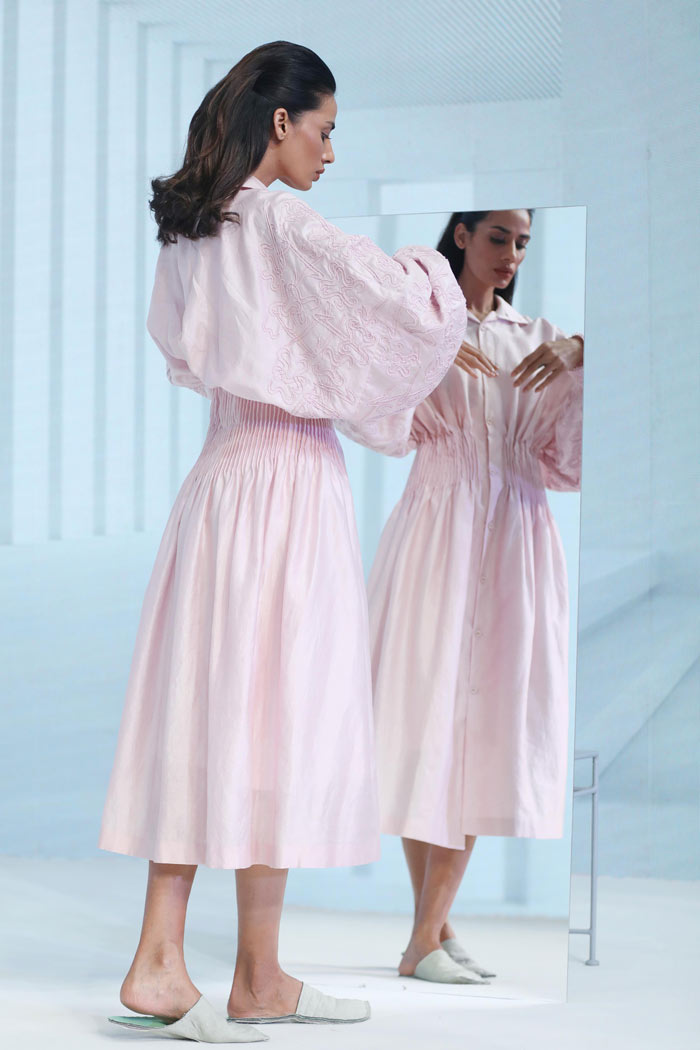 Collection By DHI @ LMIFW SS 21 in organic cottons and khadi 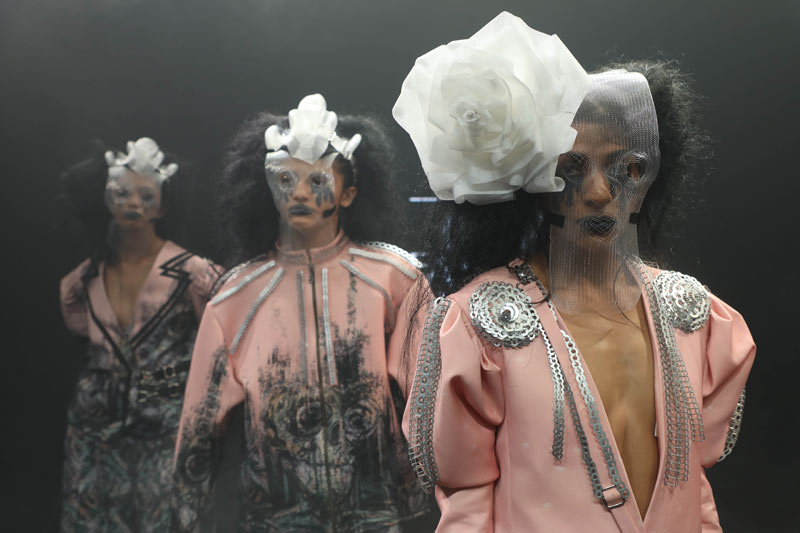 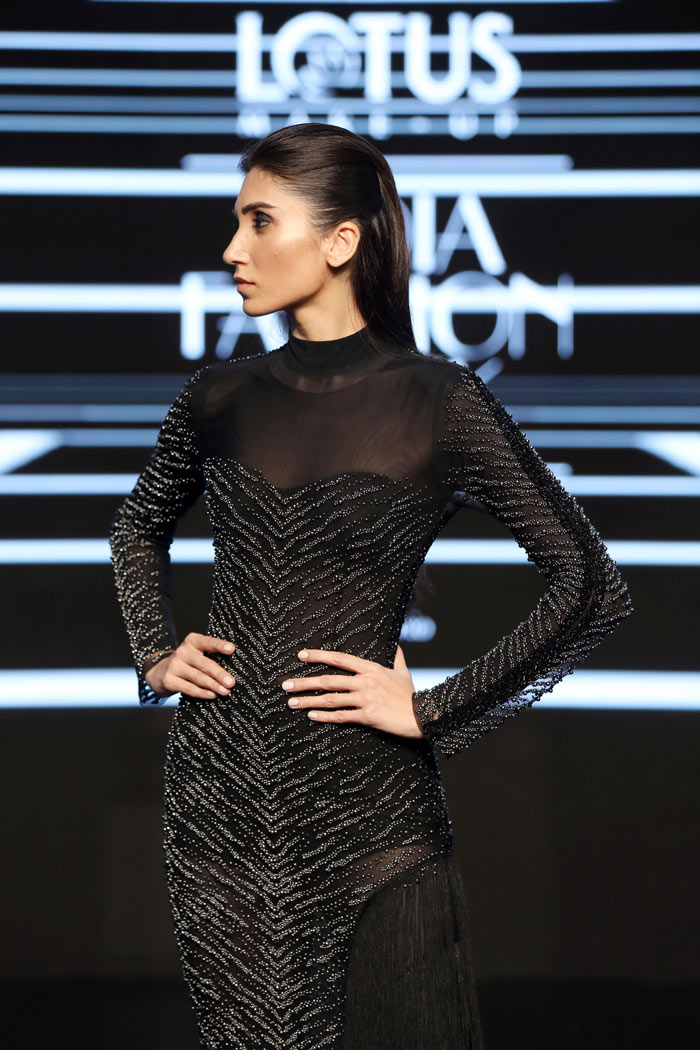 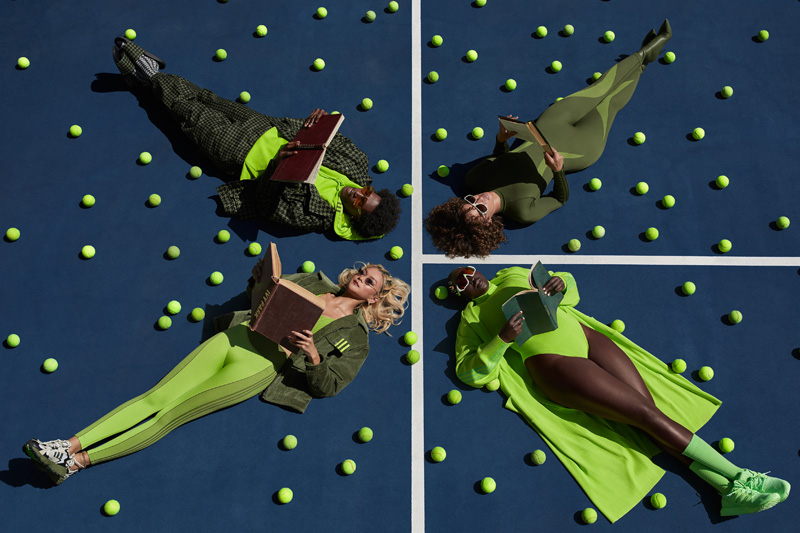 In the Ivy League 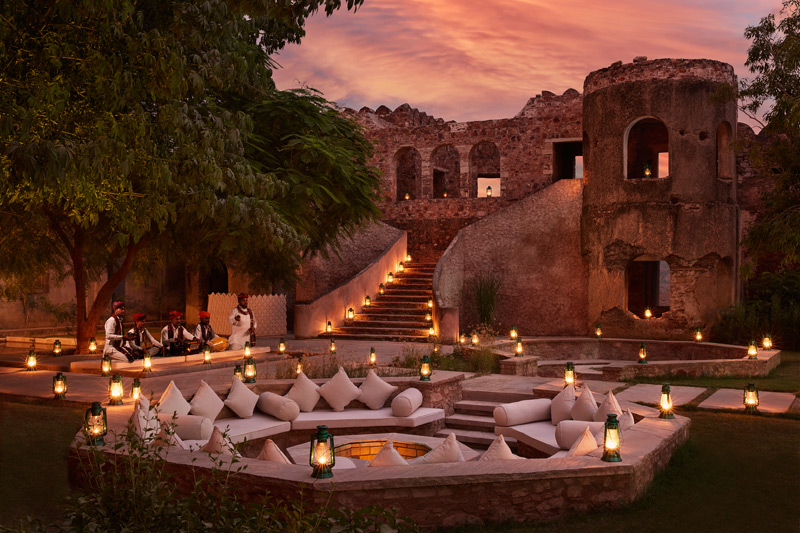 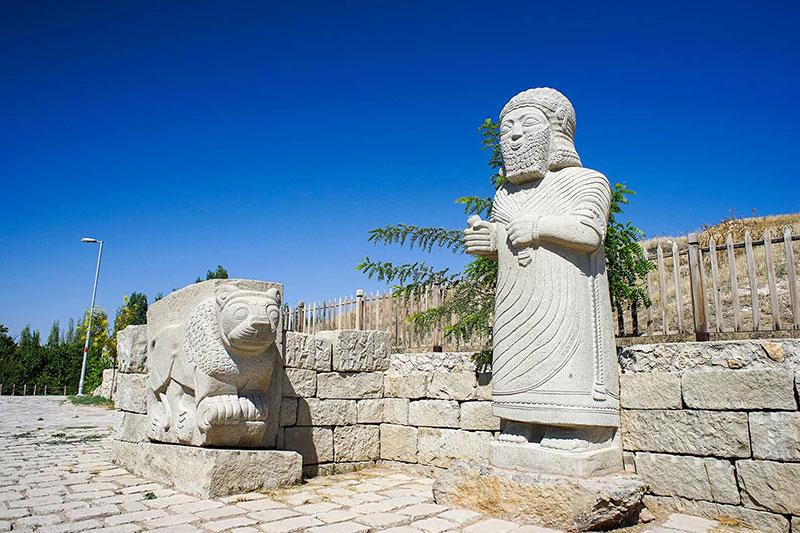