Turning the concept of brand rip-offs on its head, Gucci’s Creative Director Alessandro Michele draws attention to this anti-trend of the ’80s, introducing cheeky new accessories for the AW2020-21 men’s fashion show, with the clear message that high-end fashion is always real. 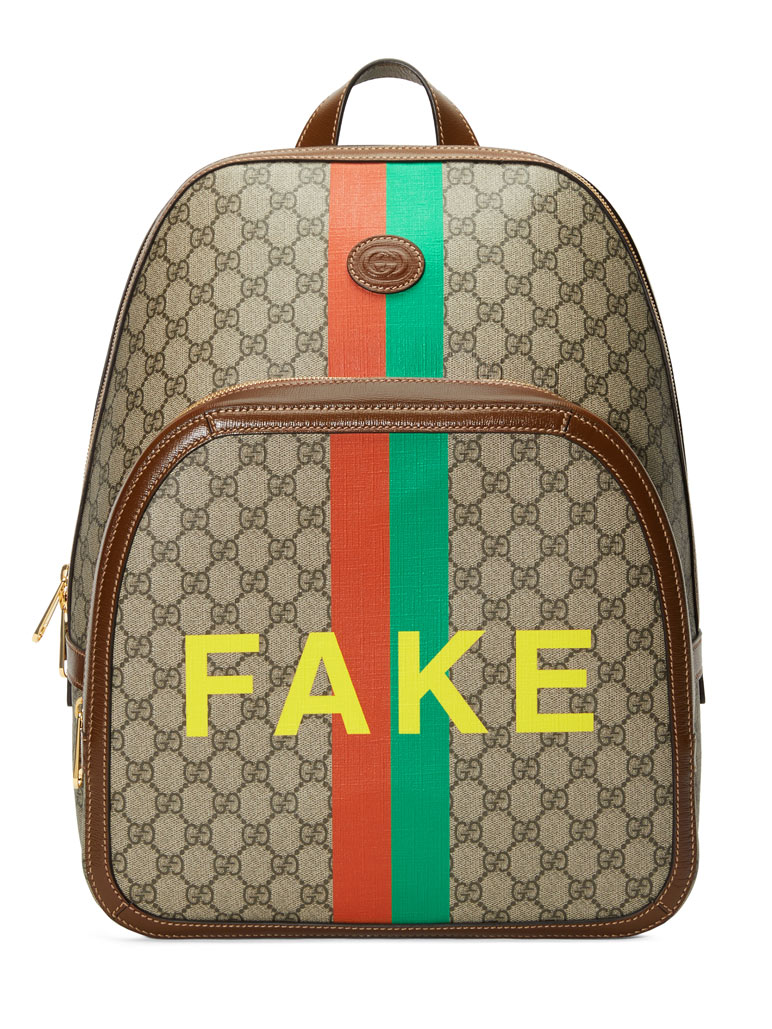 Once again, Gucci’s inimitable Creative Director Alessandro Michele strikes gold with his unique social commentary-turned fashion statement. This time, he turns the idea of copying and duplicating fake logos, on its head. The ‘Gucci Fake Not’ motif is a playful commentary on the idea of imitation, and was a strong theme in the Gucci Autumn/Winter 2020-21 men’s fashion show. From clothes to accessories, audiences were treated with tongue-in-cheek messages that reinforce the idea that the act of imitation is, at the end, pointless, and the maison always wins.

The ‘Gucci Fake Not’ motif draws inspiration from the appropriation of logos that began in the early ‘80s and became part of the language of streetwear. It is Alessandro Michele’s irreverent and ironic homage to the institutional code of the brand: the logo. While fashion is usually defined by who did something first, Gucci’s Creative Director decided to approach this idea from the opposite way. This design story began with the fake Gucci logo with the bicolour stripe, first seen in the ‘80s. Alessandro Michele put this print on T-shirts and other activewear pieces. The latest chapter in this idea is ‘Gucci Fake Not’, where the lettering is combined with the colours of the bicolour stripe. The message is that Gucci’s verbiage of fashion is not only high-end, but also about mixing different worlds to make the offer more compelling. 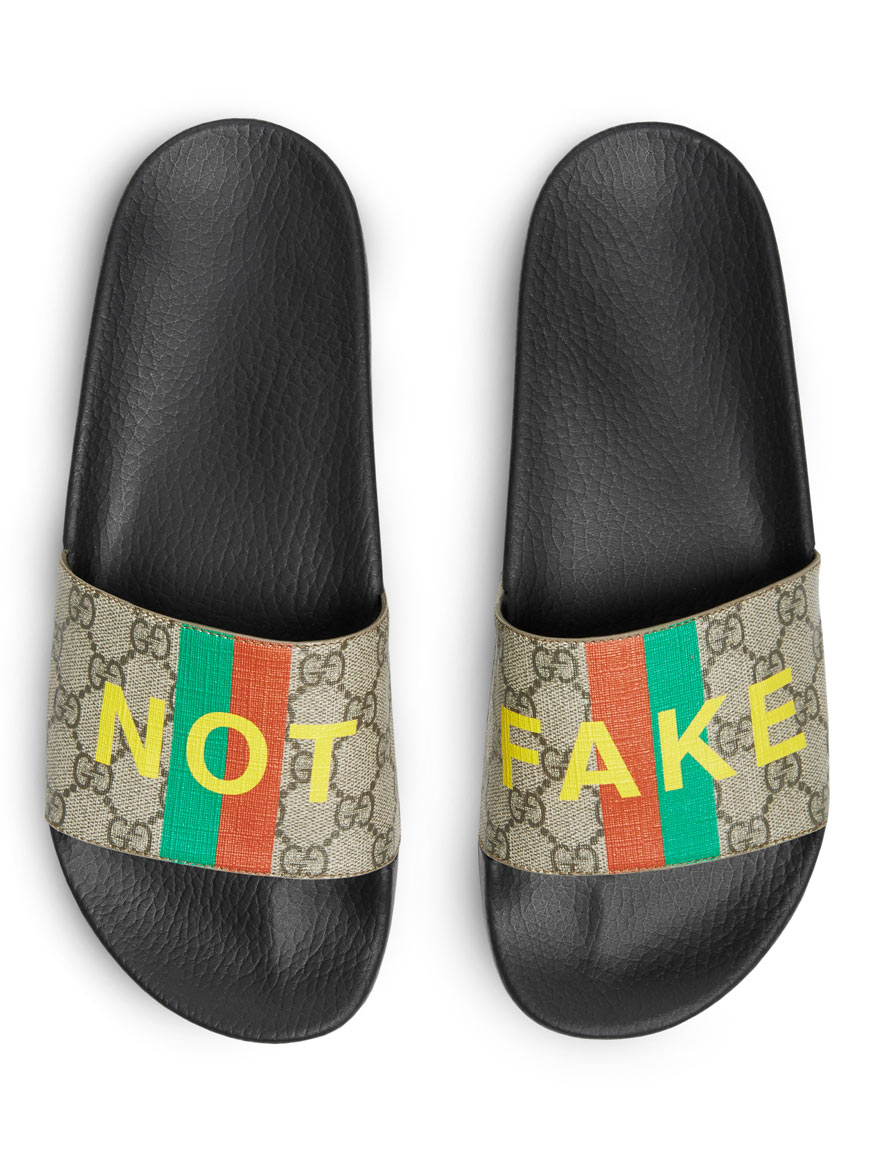 For menswear, slightly oversized white or black washed cotton T-shirts have a retro, sporty look on account of the bicolour stripe in red-green running down the middle of the front and back, with the words FAKE on the front and NOT on the back, in yellow. The same motifs appear on black and white felted sweatshirts. A hooded outerwear blouson with light padding, and a lightweight lined blouson with stand-up collar, both with an all-over beige/ebony GG pattern, have the same arrangement of words and sporty stripes. 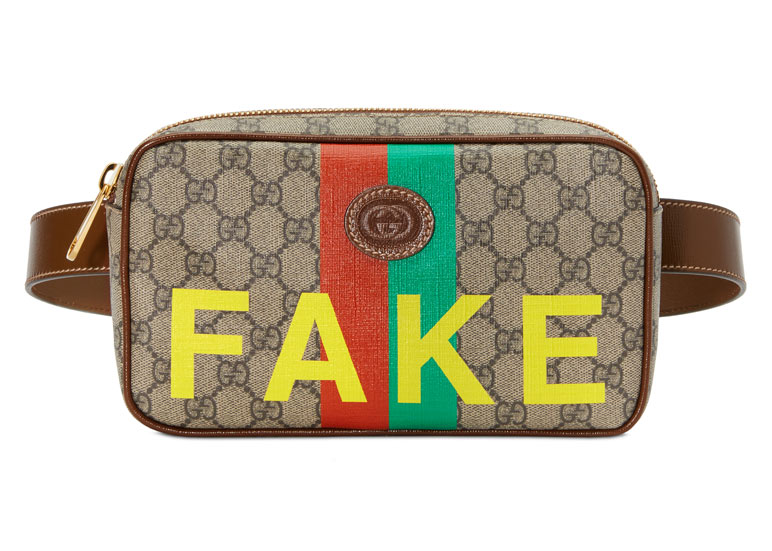 This two-sided use of the FAKE/NOT lettering has also been applied to luggage, where beige-ebony GG supreme material has been used as a base and trim is in brown leather. An East/West top-handle tote, backpack, belt bag, medium-sized duffle, small duffle (with gold Horsebit detail), hard suitcase and hard beauty case all come in this material and all feature the vertical red-green bicolour stripe and the word FAKE on one side and NOT on the other, again in yellow. The same design adorns small leather goods in GG supreme – a variety of wallets, a pouch and a cosmetics case, all with the words FAKE and NOT in yellow on the front and back. 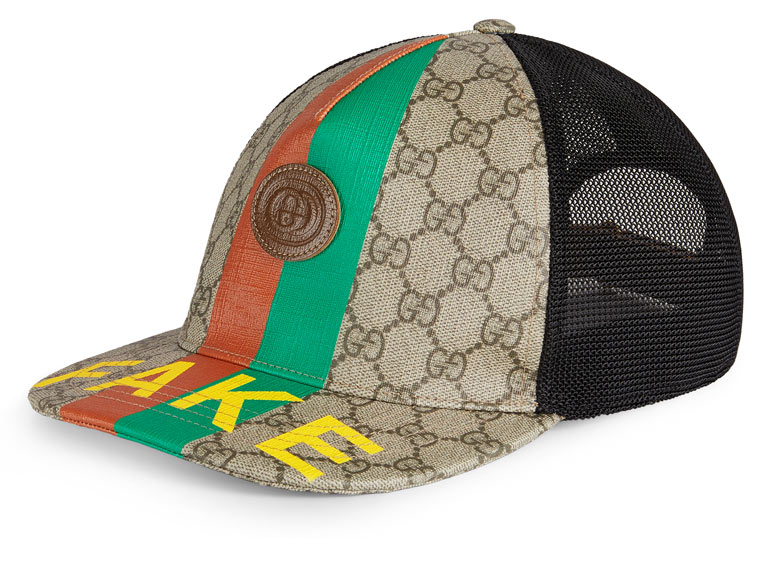 For accessories, a baseball cap in GG supreme canvas and a stole in light gauze-effect wool with an all-over beige/ebony GG pattern also feature the red-green bicolour stripe and the words FAKE and NOT in yellow (on the cap, FAKE sits on the top side of the peak, and NOT on the bottom). There are also mid-calf-length socks in ivory or black with the red-green bicolour stripe running their full length and the words FAKE and NOT in yellow (one word per sock) displayed just under the cuff at the top. A lightweight, water-repellent oversized cape, with detachable hood, in beige ebony GG supreme pattern also has the red-green bicolour stripe front and back with the words FAKE and NOT in yellow (FAKE on the front, NOT on the back). 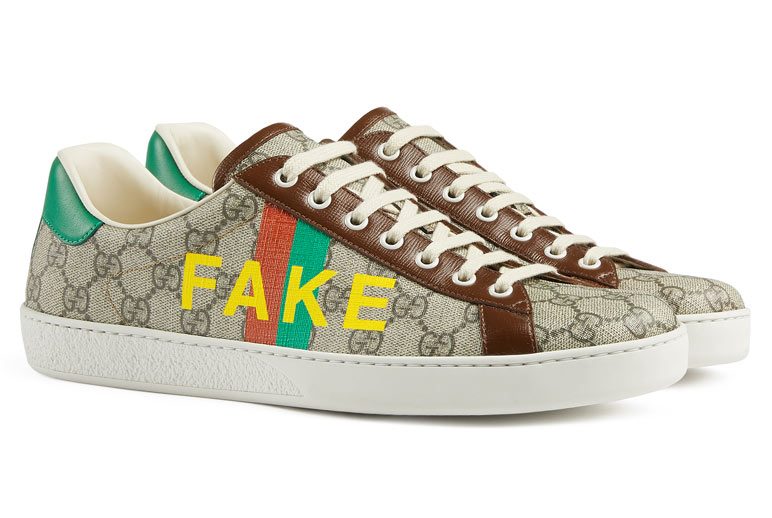 Genderless styles have also been given the FAKE/NOT treatment. The Ace is introduced with a GG supreme material base, this men’s and women’s sneaker has the House red-green bicolour stripe on the sides and a green leather back tab bearing a gold Gucci logo. It features rich brown leather piping too, and the word FAKE in yellow over the Web stripe on one shoe and the word NOT in yellow on the other shoe in a matching position, also over the Web stripe. Finally, the Pursuit slide is offered, also in GG supreme, with the same red-green bicolour stripe running down the centre of its band with the words FAKE and NOT in yellow printed over this – one word on each shoe. 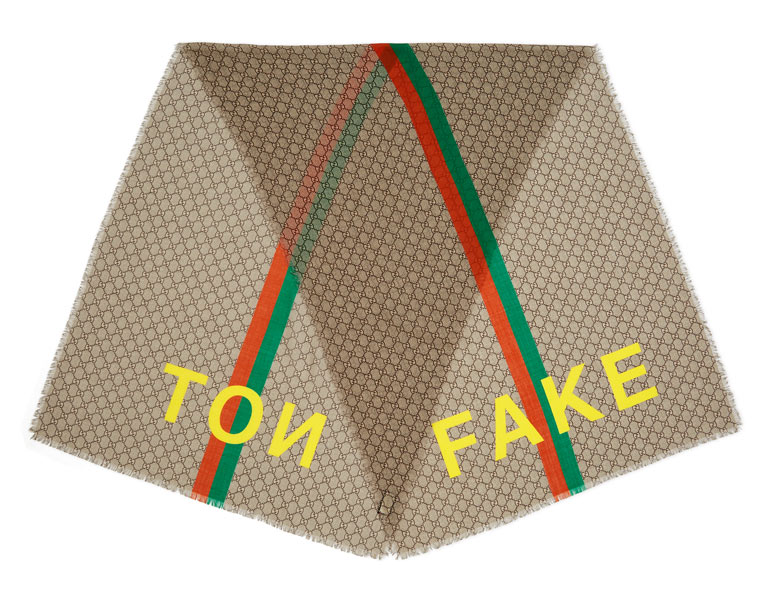 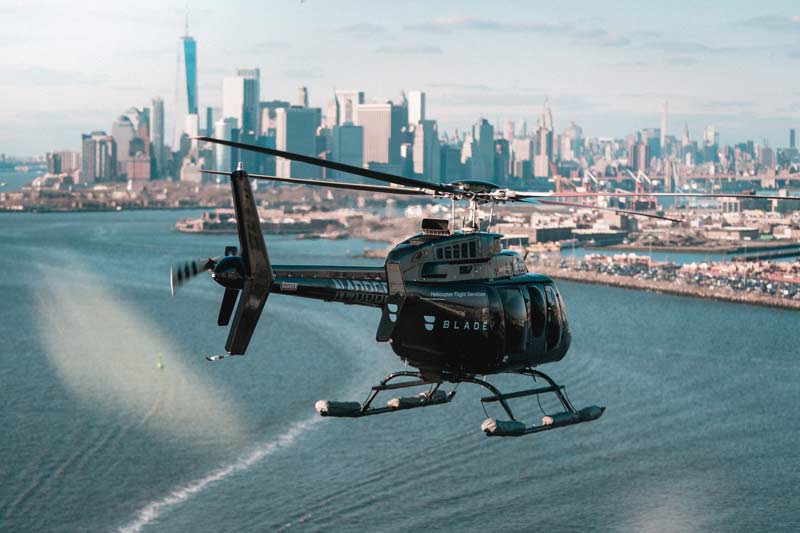 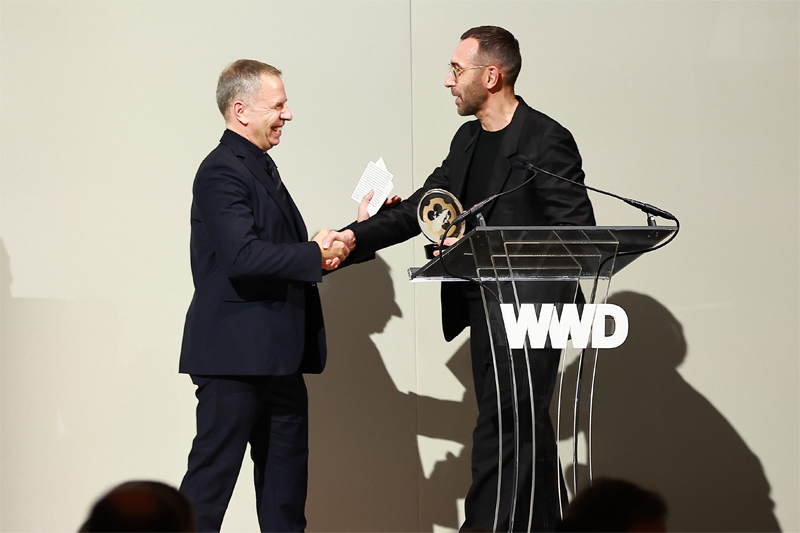 A Night of Celebration