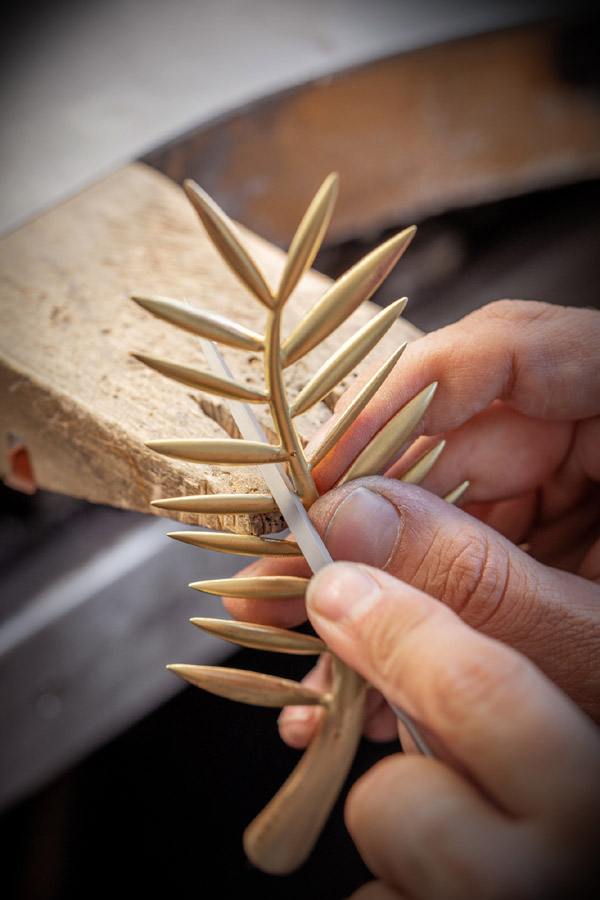 Reworking the shape of the Palme

After the historic Palme d'Or won in 2021 by Frenchwoman Julia Ducournau for her film Titane (the first time it had been awarded to a female director since Chopard became the creator of this award in 1997), Chopard is delighted to celebrate the 75th edition of the Cannes Festival, which coincides with the 25th anniversary of its partnership. To celebrate this double jubilee hand in hand, the Swiss jeweller has created a unique trophy by placing the Palme d'Or – of which two tiny leaves will be diamond-set – on a rose quartz base.

The Palme d'Or, a sketch

The stone of love to celebrate the most beautiful love story

Honouring the 75th anniversary of the world's greatest film festival – with which Chopard has been nurturing a passionate relationship for 25 years – in due style called for an exceptional Palme. The Maison’s Artistic Director and Co-President Caroline Scheufele decided to revisit the Palme d'Or by studding two of its tiny leaves with diamonds from suppliers certified by the Responsible Jewellery Council. One is graced with 75 diamonds symbolizing the Festival's jubilee; while the other features 25 diamonds to immortalize the quarter century of the partnership with Chopard: a double celebration! 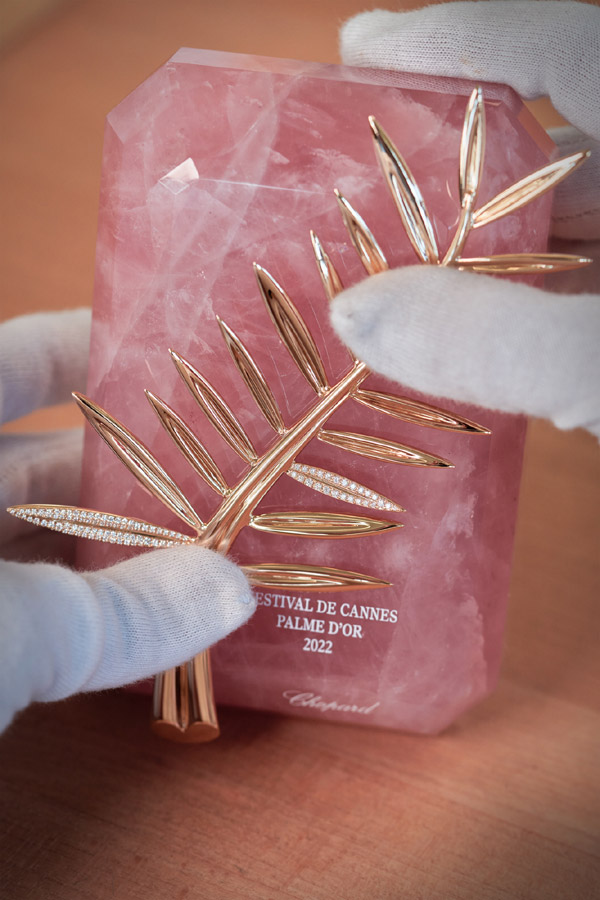 Fixing the Palme on its pink quartz base

The Fairmined-certified 18 k yellow gold Palme is not placed on the traditional rock crystal cushion, but instead on a base made of rose quartz – a stone symbolizing love. In Greek mythology, this powdery pink, delicately veined gemstone is said to have been created by Aphrodite, the goddess of beauty and love. Quartz, from the Greek word krustallos meaning "ice", is said to be the ice of the gods. Rose quartz was chosen to symbolize the unconditional love binding the Festival with cinema – as well as that of Chopard with the Festival since 1997, when Caroline Scheufele left carrying a Palme d'Or to be reinvented after a meeting with then Festival President the late Pierre Viot. Ever since, Chopard has cherished this partnership as a love story to be written, entirely contained in these constantly renewed vows, exactly as Caroline Scheufele is highlighting at Cannes this year with the theme ‘Chopard Loves Cinema’. 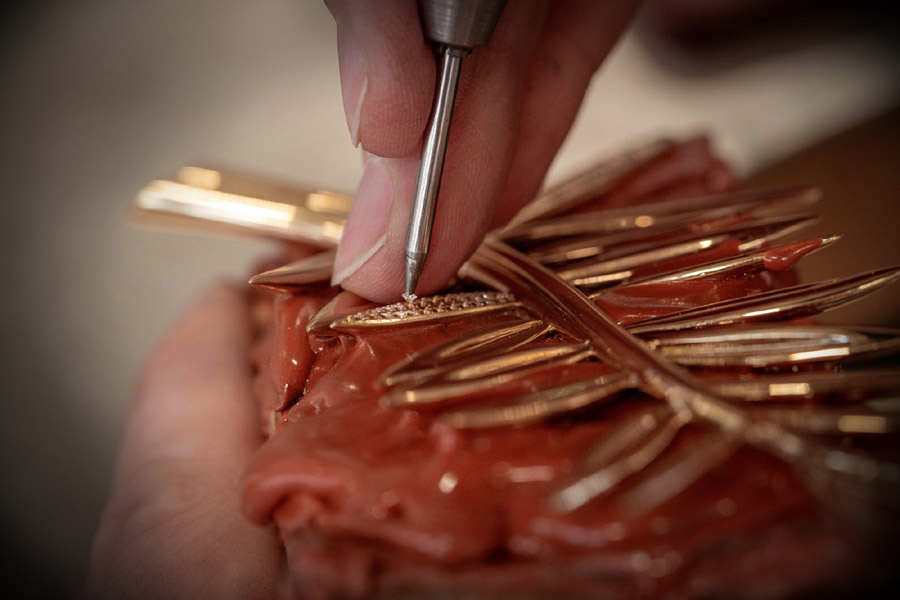 Five years ago, for the 70th anniversary of the Festival, the Haute Joaillerie workshops were already hard at work designing an anniversary Palme whose stem and foliage were exceptionally studded with a shower of diamonds. A Palme that made a lasting impression, as did the one in 2014 – the first to be made of Fairmined-certified ethical gold mined with respect for people and the environment, making it the world’s first and only ethical film trophy.

In 2021, it was a young woman, Julia Ducournau, who was handed the Palme d'Or by Sharon Stone for what was only her second feature film: Titane. The Maison is proud to have participated in recognizing a young filmmaker still at the start of her career and this was the first time it had been awarded to a female director since Chopard became the creator of this supreme reward turned jewel. Back in 1993 – when Jane Campion won this accolade for The Piano Lesson at a time when Chopard was not yet a partner of the Festival – the trophy existed only in its raw gold-plated and Plexiglas version.

Last year (2021) was in many respects a memorable edition of the Cannes Festival, since the two most important future-oriented official prizes – the Palme for short films and the Caméra d'or for the best first feature film – also crafted by Chopard, like all the trophies awarded by the Festival, were also won by young female directors: Tang Yi from Hong Kong for Best Short Film and Antoneta Alamat Kusijanovic from Croatia. for the Caméra d'or. 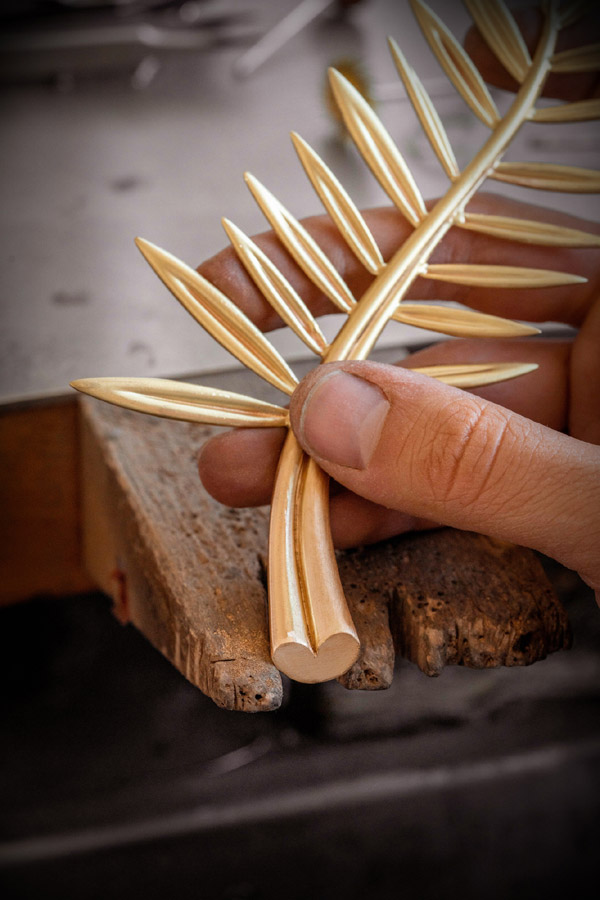 How is the Palme d’Or made? The first step in casting – with the so-called ‘lost wax investment casting’ technique. The stem and leaves are arranged on a pouring gate former (sprue base) around a central wax pillar or sprue. The pouring gate is then sealed by a flask to be filled with a liquid refractory plaster coating. This plaster is hardened and fired in a furnace at 760°C during an entire night. The wax flows out through the central sprue to leave a negative imprint on the plaster. The metal is melted and poured to fill the empty cavities. The ‘tree’ is now positive – the plaster is broken and the ‘Palme’ is washed using pressurized water and an acid deoxidation process.

After the casting operation, the jeweller cleans the surface and then polishes the separate elements by hand. The leaflets and stem are meticulously corrected, and then assembled into the final ‘Palme’. Each gold leaf is adjusted on the stem in its correct position and soldered with a torch. 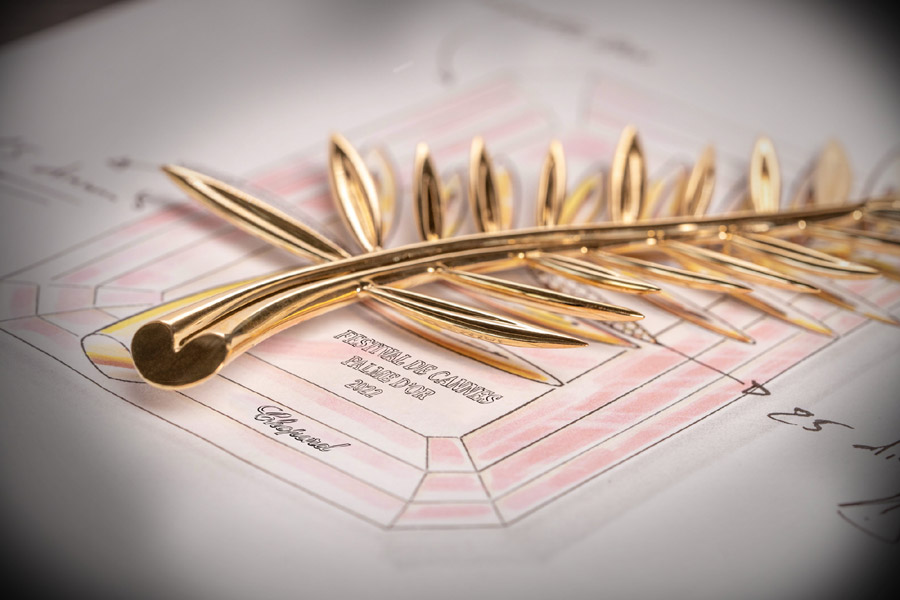 After polishing (on the original sketch)

Two of the Palme’s leaves are then set with diamonds. The rose quartz block is drilled with a diamond milling cutter to accommodate the small supports on which the ‘Palme’ will rest. The Palme is then attached to its cushion, and voila! 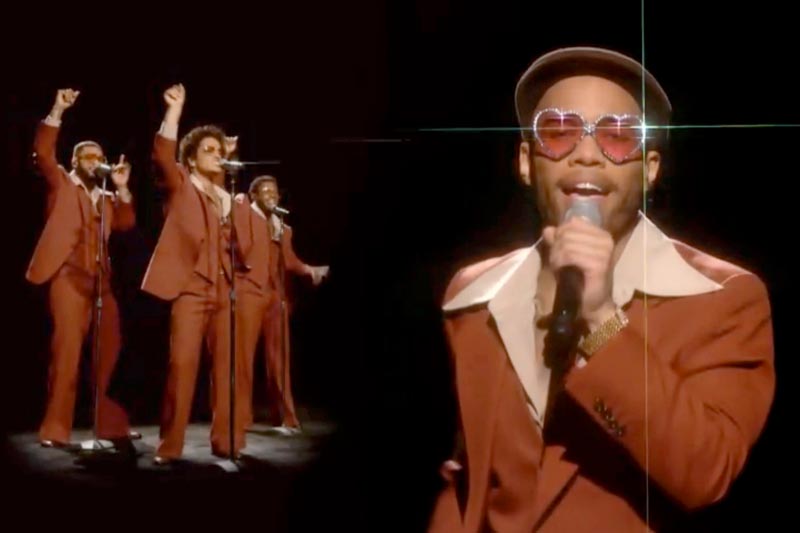 Night at the Grammys! 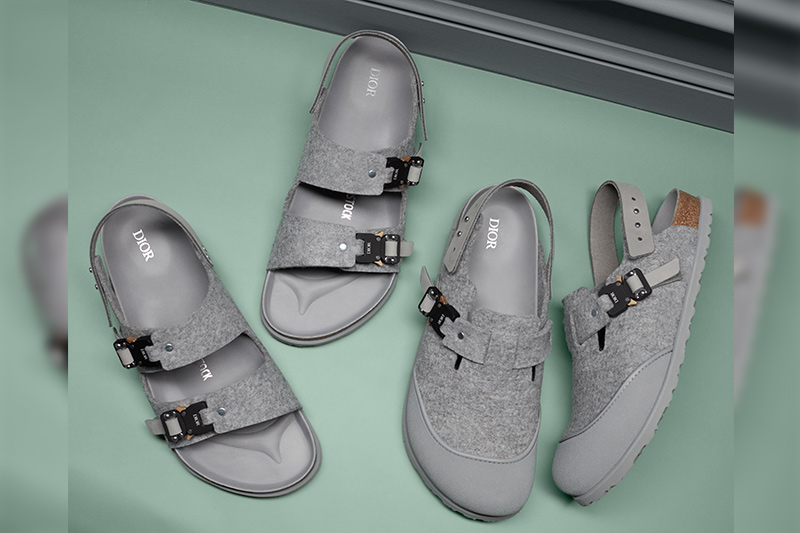 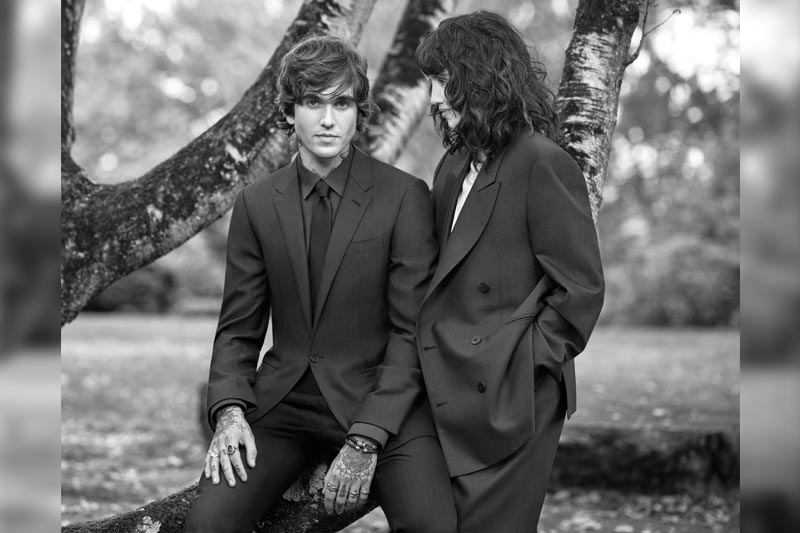 The Making of a Modern Man